Asbestos is a group of fibrous silicate minerals used in construction materials and various other industrial applications. These minerals are naturally present in rocks and soils. Asbestos fibers belong to two main groups of minerals, serpentine (chrysotile) and amphibole (amosite, crocidolite, anthophyllite, tremolite and actinolite). The asbestos fibers have an average diameter of 0.02 to 0.1 μm, (a human hair has diameter of approximately 40 μm).

Asbestos is known for its structural strength and thermal stability. Since antiquity, it has been used for manufacturing ceramics and textiles (mortuary cloths). It is since the industrial revolution that asbestos has been widely used for materials resistant to fire, heat and friction. In Quebec, it was mainly between 1930 to 1990 that it was used in the construction industry. Thus, chrysotile can be present in the contaminated soils from the asbestos-containing rubble or embankments.

Asbestos fiber inhalation is known to be a health risk. Exposure may lead to certain serious pathologies such as: pulmonary fibrosis, asbestosis, pleural mesothelioma, etc.

Amphiboles are one of the most common mineral groups in nature. However, they are much less used in the industry than chrysotile. Among the amphiboles, only a few minerals can be asbestiform, such as amosite. Amosite is needle shaped and looks pale brown yellow. It is frequently found in flocking, heat insulating materials or other materials.

Tremolite and actinolite are amphiboles shaped like fine blue or greyish-green needles. Vermiculite deposits are generally interspersed with tremolite / actinolite veins. Thus, the presence of this type of asbestos is common in vermiculite and in other materials containing vermiculite.

Crocidolite is an amphibole in the form of long blue needles. This asbestos is frequently used in flocking.

Anthophyllite is an amphibole in the form of long white to beige fibers. This asbestos is rarely encountered in Quebec. It is mainly present in vermiculites from Europe. 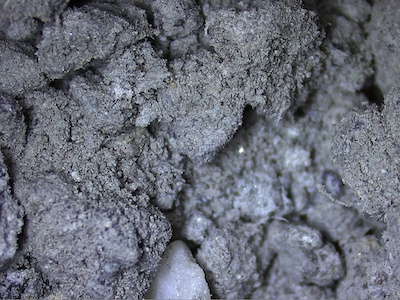 Asbestos can be found in a large number of various construction materials. 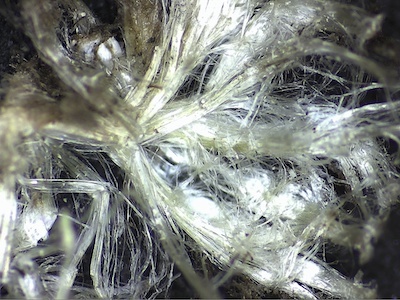 Air sample testing is conducted in working zones and in ambient air. 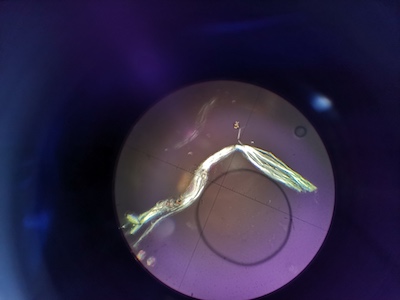